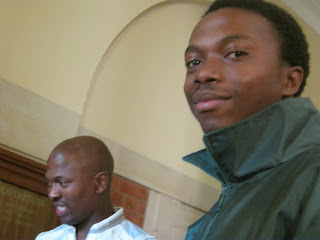 Incredibly only after 19 years of democracy in South Africa, has the MSSA elected in its first black president at its Annual general Meeting held on Sunday, 8 December 2013.

The funny thing is that there are bloggers out there that consider the election of Simphiwe Maphumulo as president to be less than democratic..... One can only laugh!

But who is Simphiwe, and what is his pedigree?

Simphiwe, who comes from Pietermaritzburg, has been a continuously registered player since 2001. Not only that, but Simphiwe has won many Provincial and National Championships in the game of Morabaraba.

But Simphiwe is not just a local champion. According to the MSSA's facebook page (https://www.facebook.com/mindsportssa), Simphiwe has also won the following international championships:

Simphiwe was too awarded the S A Sports Awards Indigenous Sports Star of the Year Award, and reputedly walked away with a substantial cheque. The award was given by the Hon. Fikile Mbabula (Minister of Sport and Recreation). (http://www.sasportsawards.com/index.php/nominees)

It also seems as though SASCOC is happy with the choice that the MSSA's member clubs have made. In a recent posting made on the MSSA facebook page, it is reported that SASCOC president, Mr Gideon Sam stated:

"Please pass on to Simphiwe my personal congratulations on his election to be the president of MSSA. I look forward to a strong and lengthy relationship with him."

SASCOC is of course THE governing body for sport in South Africa. It is the body that selects teams for the Olympic Games, Paralympic Games, Commonwealth Games, African Games and others.