However, under the astute leadership of the Educators and the total dedication of all the team members, the team showed immense improvement.

The team won all their matches in the 2016 MSSA Online Inter-School Provincial Championships.

As  a result, the team is to be awarded KwaZulu Natal School Provincial Colours.

Not only that, but the team now also qualifies for National Team Trials on 6 June 2016.

The question is now, can this team win Trials (NTT) and become South Africa's new Protea Team for DotA.

I would like to draw your attention to the following two draughts tournaments.

Please feel free to forward this message to any draughts players you think might also be interested.

1) 15-19 March, the second Fryslân Open Draughts Tournament will be held in the town of Franker in the Dutch province of Frisia / Fryslân / Friesland.

Games will be played according to the Frisian rules of draughts, which allow not only diagonal but also straight (horizontal and vertical) captures.

For details, both of the rules and of the tournament, please go to the website www.frisiandraughts.com.

These rules have the effect that only very few games end in a draw.

An advantage of only one piece is often sufficient to win the game. An endgame with two kings against one is theoretically winable.

There are currently still two places available for international players.

Players can apply before 1 March by sending an e-mail to martenwalinga@hotmail.com or liuwe.westra@mensa.nl.

ps. During the tournaments, the games and playingrooms are livestreamed on our website.


2) On Saturday 19 and Sunday 20 March there will be tournament for a special variant of Frisian draughts, in which both players start with only five pieces each.

This variant has officially been baptised FRYSK! The first World Championships for this new draughts variant will be played this year.

For all details and for learning material, go to www.frisiandraughts.com  and www.frysk.info

There are 50 places available for the tournament on Saturday 19 March. The best players in this tournament, together with two national champions and the top 8 players from the Fryslân Open, will play the First Official FRYSK! World Championships.

Playerslist so far for Fryslân Open 2016:

At some stages  it was as though the opposition was not even present. Even 'Old Guard' just crumbled in front of the onslaught presented by Rondebosch High.

The fiercest resistance was  put up by DF Malan and Northcliff High, but even such schools were able to withstand Rondebosch.

The team from Rondebosch has  thus won the following championships for CounterStrike: GO:
This is a team  that  is expected to go far, and I'm putting my money on this team to represent SA as the 2016 Protea eSports Team for CounterStrike: GO.
Posted by Angellah at 13:34 No comments:
Email ThisBlogThis!Share to TwitterShare to FacebookShare to Pinterest
Labels: CounterStrike, CS:GO, DF Malan, Dillon Lewis, eSports, GO, Jessie Joubert, Matthew McPetrie, MSSA, Northcliff, Protea, Robert van der Merwe, Rondebosch, Sam Gild, school, Simon Zandstra

Sasolburg High sets itself as the team to beat!

Even though Sasolburg  High has just started an eSports team, the team thoroughly trounced all its opposition in MSSA's 6th Online Inter-school Championships which were held  on 20 February 2016.

The team cruised through the competition,  beating all it opposition to end up on a perfect score.


Thus the team has not only qualified for the prestigious National Team Trials to be held on 4 June 2016, but all five players have qualified for Free State High School Colours.

This is the first time ever that a team has qualified for Free State Colours for the League of Legends game title.

On 20 February 2016 MSSA held its 6th Annual Online Schools Championships.
The championships involved schools from seven provinces, and many of the top private and public schools were represented.

Every year more-and more schools affiliate to MSSA, and many predict that within the next five years, the school online league shall involve more schools than any other sport.
Players were able to participate in CounterStrike: GO, DotA 2, FIFA ’16, HearthStone, League of Legends, StarCraft II, and Tekken Tag Tournament II.
The Online Schools Championships is the breeding ground for the National Protea Teams, and the schools championships allows players to qualify for the coveted National Team Trials which are to be held on 4 June 2016.
MSSA believes that the winning teams and players will go on to rattle the cages off the older teams, and thus provide the competition needed for South African gaming to improve upon its current standards. 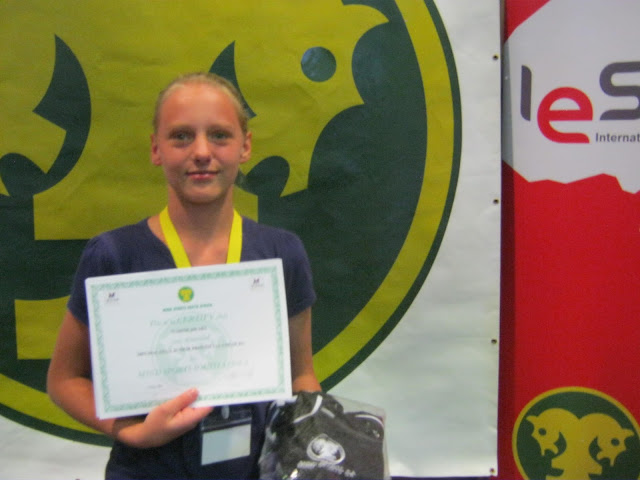 The championships involved schools from seven provinces, and many of the top private and public schools were represented.

The game title of  has often been played at IeSF’s World Championships, and South Africa has always done well in such title. Lyrene Kuhn and Morizane Boyes represented SA well!

However, there is a new challenger on the block!

Nadine started competitive gaming when she started her schooling at HTS Witbank. From the onset, Nadine upset the status quo by winning the 2014 Mpumulanga Championships.
In 2015, Nadine won the SA School Online Championships.

This year Nadine is off to a good start by winning the Schools Online Provincial Championships.

It is going to be a good year!

'We are all equal" 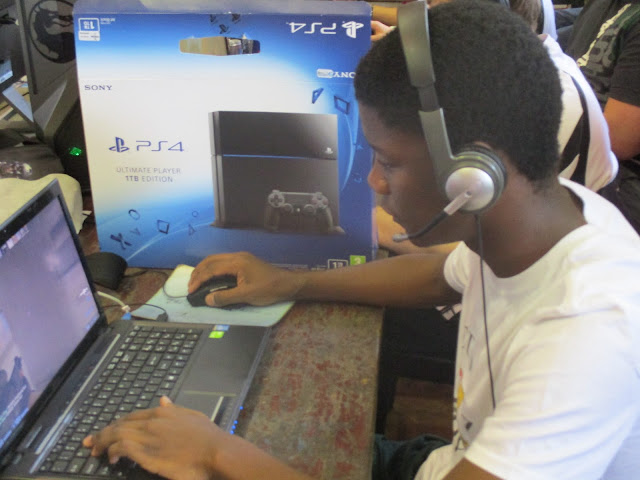 Jaun-Luc Krylo Cronje recently wrote, "...race and gender has no bounds. We are all equal, we are all gamers and lastly ANYONE can join a clan and play competitively as long as the person can do one thing....."

The problem with many middle-class South Africans is that they do not really understand the problems facing South Africa.

Thus, if these figures are correct South Africa has an unemployment rate in excess of 80%.

Just driving from  Cape Town International Airport and passing rows and rows of low-cost housing and squatter camps, only a person blind to the inequities of South African society would think that we all equal.

While many middle-class gamers are moaning that they do not yet have FFTH supplied to their homes, there are many people going to sleep hungry. I also state going 'to sleep' as opposed ti going 'to bed' as many South Africans do not even have a bed, a pillow, or a mattress.

How can a person who begins life in such poverty then compete equally against a person who has never known want, malnutrition, safety, or the lack of all modern technology?

Imagine you are standing at the bottom of a well in a large estate. Your thoughts are not about the mansion on the property or the abundance of food that  the estate produces. Instead your thoughts are almost entirely focused on getting out of the well. However, without an external force, it is impossible to get out of the well.

The owner of the estate can say, "We are all equal", but clearly we are not!

When you watch the privately owned tournaments the disparity becomes even more pronounced.

It is quite clear that  only Mind Sports South Africa is the only body in eSports that is really concerned with transformation and development.

The private companies involved in eSports in South Africa seem to  be  quite content with keeping the status quo by saying that  every  gamer  has the same chance.

However, as seen in the above, we can  see that the vast majority of South Africans will never have a chance unless someone lends a helping hand and goes the extra mile.

It could too be argued that any organisation that does not participate in transformation and development is a dinosaur as their bodies will become less-and-less popular, and will, eventually disappear.
Posted by Angellah at 22:54 No comments:
Email ThisBlogThis!Share to TwitterShare to FacebookShare to Pinterest
Labels: development, equal, eSports, FFTH, gamer, inequality, Mind Sports South Africa, MSSA, status quo, transformation 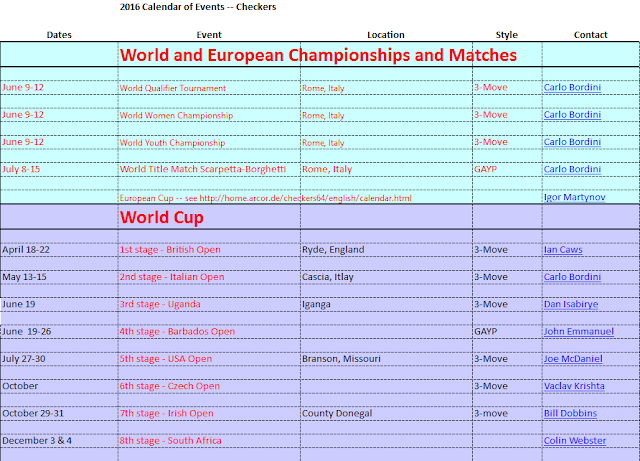 The World Checkers Draughts Federation (WCDF) has just released the standings for the World Cup.

Of course all the usual faces are there, and the men's section is dominated by the Italian players.

Well done to Sergio Scarpetta for winning the title!
However, South Africa did do well,

In the men's section, South Africa has no less than three players in the top twenty.

The highest placed South African, is none other than SA National Champion, Francois Mouton from Tuks Mindsports Club.
Lubabalo Kondlo, is just behind Francois, and it will be interesting to see if Lubabalo takes on Francois directly.

In the women's section, Sharné Nortjé fought her way into third place with Lucille Brown and Sonja Brown finishing in 6th and 10th places respectively.

Needless to say MSSA is very proud of all its checkers players.

The South African team was considerably younger than their Ghanaian counterparts which falls in line with Mind Sports South Africa's policy of developing teams for international competition. Part of MSSA's development programme includes the inclusion of females into the national team in order to eradicate gender bias.

First up was Joline Bico, the only female currently serving in a national team for the FIFA '16 title. Joline fought fiercely against her opponent, never giving her opponent any chances. However, the Ghanaian proved tto strong for her and Joline finally lost both her games after a long struggle.


Bonge Zwane proved to be the unluckiest of the three South Africans. Bonge had more shots on goal than his opponent, had a far stronger attack than his opponent, but failed to capitalise on his strengths. Bonge too lost both his games.

Even the current South African champion, Kyle Turnbull, found that the matches were harder than he suspected. His opponents were shocked at just how good Kyle is. However, Kyle lost his first match, but quickly bounced back to win his second game.

Thus the South African team (all from Witbank) may have lost against Ghana, but as Kwezi Hayford of Ghana eSports Association stated, “ We did not think that the South Africans would be so strong. Already our players are talking about a rematch”.

Thus the SA team may not have had the results that they wanted, but they garnished the respect and friendship of their opponents.
Posted by Angellah at 17:31 No comments:
Email ThisBlogThis!Share to TwitterShare to FacebookShare to Pinterest
Labels: Bonge Zwane, eSports, FIFA'16, G2A, Ghana, Joline Bico, Kwezi Hayford, Kyle Turnbull, Match, MSSA, MWEB, Southh Africa, Test

The 24th OLD EDWARDIAN SUMMER WARGAMES CHAMPIONSHIPS shall be held at the Old Edwardian Society, 11 Ninth Avenue, Lower Houghton, Johannesburg, on 13 & 14 February 2016.
This is an open championship.
The championships shall start on both days at 9H00. The figure-games shall be played on both Saturday and Sunday. Periods are to be played only if there are at least four (4) paid up entries for each such period submitted by 12 February 2016.

The championship uses the very popular 600 points format where losses are carried forward. Should you require the full rules, please contact the writer.

Fees must please be deposited into the Old Edwardian Society's account, which is:
F.N.B. - Killarney
Branch Code 256-205
Account Number 62071433115
Players that enter Ancients must note that players may use two army lists, and that the' MSSA's scoring systems shall be used.