The Ladder still shows Joshua Williams (Northcliff High School) as being in pole position. However, MSSA's Online School League for 4 term schools saw a much improved standard of play from Oakhill School.

From being unranked, Sash Sunkar, Matt Jenkin, Blake Govender, and Francois Viljoen (all of Oakhill School) are now all sitting above the half-way mark.

It is thought that any one of such players from Oakhill School stand a more than reasonable chance of unseating Joshua Williams.

The Ladder works on a system of challenges.

Clubs may challenge any club on the ladder. Any club so challenged has 5 days within which to respond and play the match. Such rule allows the ladder to retain its dynamic nature and stops the challenged club from delaying unnecessarily.

However, any team challenged during any official MSSA event while both teams are participating in such event, and are paired by the umpire to play against each other, must play such challenge. This means that any or all games in a MSSA Regional, Provincial, and/or National Championship may count as ladder games.

The full rules for the ladder may be found here: Important changes to MSSA's Inter-Club Ladder rules.

Other National ladders are:

Posted by Esports South Africa, and other games at 15:27 No comments:

As one of the oldest mind sports clubs in South Africa, having been established in 1982, Old Eds (to which it is lovingly referred) has remained at the forefront of promoting all the various disciplines.

The club has produced no less than five (5) world champions, and also is actively involved in the administration of the sport at national and international levels.

The club too also is the only club in Johannesburg that has hosted City of Johannesburg Regional Championships.

Such championships have produced the following winners:

Entries will close at 18H00 on 7 September 2018. Players who wish to compete in any of MSSA's Championships are advised to complete their annual registration forms so that they may register as Registered Players as soon as possible. Late entries will only be accepted in exceptional circumstances.

All gamers are reminded that the City of Johannesburg Regional Championships is an open championship. In other words any player is entitled to enter the championship – no matter whether they are a member of Mind Sports South Africa (MSSA) or not. If you have any queries, please contact the MSSA.


The schedule of events is as follows:


Rules and Regulations: All Rules and Regulations pertaining to eSports are available from the MSSA. Players are strongly advised to familiarise themselves with the LAN Bylaws and all Period Specific Rules. If any Player wishes to provide advice regarding the drafting of the Period Specific Rules they are encouraged to contact MSSA who will take all comments into account.
The following Medals may be awarded at the MSSA's 2018 City of Johannesburg Regional Championship:
Colours and National Team Trials:
Please note that times may be changed to take into account load-shedding.

Posted by Esports South Africa, and other games at 09:50 No comments:

After a long struggle... 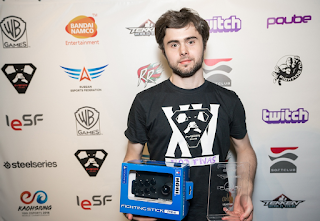 At the online test match against Russia held on 28 August 2018, Sergei Belousov of Russia faced off against South Africa's Alasdair Donaldson in the Tekken 7 esports title.

For such test match Alasdair Donaldson earned his 11th 'cap' for playing in the South African Protea Esports Team. Alasdair Donaldson performed well at IESF's 9th World Championships - Busan where he sailed through the group stages to to finish 13th overall.

However, in the test match, Alasdair not only had to contend with the finest that Russia could pit against South Africa, but also the latency issues that dog South African esports athletes when playing online test matches.

Nevertheless, Alasdair's innate sportsmanship shone through as, despite the issues, he gave it his all.

Although Sergei Belousov (Russia) eventually won the test match, Alasdair made him fight for it all the way.

After the gruelling test match, Alasdair thanked his opponent, and admitted that he had learnt much during the match.

MSSA is confident that Alasdair Donaldson will perform even better at IESF's 10th World Championships - Kaohsuing City.
Posted by Esports South Africa, and other games at 22:20 No comments:

With the Mind Sports South Africa's (MSSA) annual Online Inter-School League for 4 term schools having drawn to a close, the winners are able to be announced.

The league started back in 2010 thanks to the input and support of ASUS, and since then has continued to grow in popularity.

Through playing in the official school league, learners are able to earn:
The winners of the Counter-Strike: GO, DotA 2, League of Legends, StarCraft II, and VainGlory esports titles have automatically earned themselves Provincial High School Colours as  well as a place in MSSA's 2018 National Team Trials.

What is becoming more and more evident, that those schools that contribute the most to the development of esports, reap the greatest rewards.

Posted by Esports South Africa, and other games at 10:59 No comments:

In the Counter-Strike: GO online test match between Russia and South Africa that was held on 28 August 2018, the 2018 Russian team demonstrated the might that is Russia.

The South African Protea Counter-Strike: GO team, ably lead by Marisa van der Westhuizen, fought long and hard. However, the Russian team showed no mercy in their first international test match and snatched the spoils away from South Africa.

Johan van Breda, stated that while he was satisfied with the team's performance, the test match had highlighted areas where the Protea team must pay special attention. However, Johan did state that he was very proud of the Protea Team, and that through the team's positive attitude, dedication, cohesiveness, and ability, will be a credit to all South Africa.

Posted by Esports South Africa, and other games at 08:25 No comments: