South Africa loses to Denmark and Israel - but do it in style!

"The Tri-Nations  held between Denmark, Israel and South Africa was held at MWEB's MCAVE on Saturday, 12 October 2013 from 18H00.


Philisande Macwili was there to represent the Western Cape Department of Sports and Recreation, and to award the National Federation Colours to the South African team. 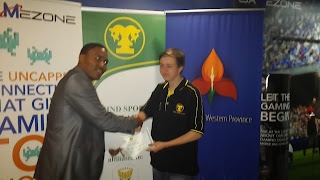 However, the South African team, loosened up in the dying moments of the games, and started to claw their way back into the game, but it was too late, and the Israeli's finished the game as the victors.

After the break, the South Africans had to face the juggernaut that is Denmark.
However, the young captain, Conradie van Heerden had re-inspired his team, and the South African team that took to the field of battle seemed to be a totally different team altogether.

Although the Danish team is without doubt one of the favourites in international League of Legends competition, the South African team came out fighting.

The audience at MWEB's MCAVE was ecstatic with the very different game play, and South Africa fought long and hard against Denmark, making the marauding Danes pay dearly for every victory during the game.

However, strength and experience won the day, and the Danes chalked up yet another victory as South Africa finally had to concede to the European team. It was a hard game, but the South Africans had played well above their usual standard.

Team member Kyle Rhoodie said to Philisande Macwili, "It was a hard game, harder than any game I have ever played before. I am glad that I did it as I have learned so much. It is one thing to watch the top players in the world, and it is another thing to play them. They were everywhere in the game, but we will be ready for them the next time we play".

Conradie van Heerden too stated, "It was an honour to play for South Africa, the help from MWEB is also invaluable in allowing the team to improve. Now that we know what we are up against, we know where our faults lie, and we know on what we have to work. The team played hard and every member gave of their best., but we can do better, and we will!"

After the match against Denmark, the team joined the audience to watch Denmark against Israel.

Denmark flew into action and immediately began inflicting damage. There was no doubt as to who was going to win. The strength and experience of the Danes also proved too much for the Israelis.

Thus the Danes took the Tri-Nations,

After the match the Israeli team captain, Tal Winter said, "The TriNations were really enjoyable event and the games against both SA and Denmark were challenging and good. The event was helpful to us, as it showed us how much we have to work and improve until the IeSF World Championship, and we are looking forward to see SA and Denmark again in Romania." This is also the first time that South Africa will compete in an officially sanctioned competition for League of Legends. The Tri-Nations is thus, without doubt, a fore-runner of things to come

It is thus clear that at the MWEB MCAVE, new friends were made, competition was had, and more importantly, all the teams had fought and strived for honour, .

The South African team that was awarded National Federation Colours is as follows: