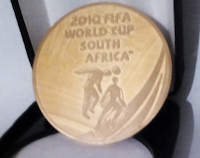 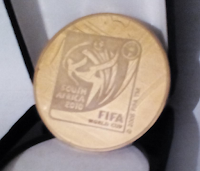 As being part of the accredited sporting scene, the officials of the MSSA are often invited to the big events, and I mean big, events.

For example, it is not unusual for the President of the MSSA to be invited to the inauguration of the President at the Union Buildings, the memorial for the late Nelson Mandela, and the Gala Dinner for the 2010 FIFA World Cup, etc.

run the body respect such rules.

Upon receipt of the coin, the then president of the MSSA (Colin Webster) transferred to coin into the MSSA's inventory.

That is what I like about the MSSA. Instead of the official holding onto a gift, it is passed on to the body, and instead of the gift just lying around in a dark drawer or in a display case, the coin will be used to help uplift a title.

This will be a floating trophy that many will want to win at the MWEB S A National Championships in order to have their name on!