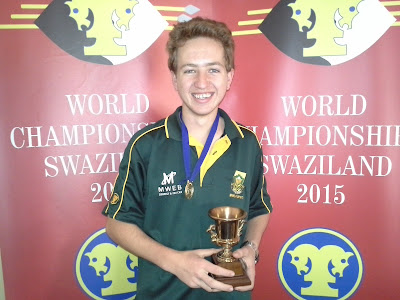 Jason Batzofin, a learner at St John's College, resident in Observatory,fought hard at the IWF's 18th World Individual Championships held at the Lugogo Sun, Swaziland on 20 and 21 June 2015 to retain his title in the Ancients Wargames period.

Jason ended the 2014 wargaming year well in December by winning the South African National Championships which were held at Tuks University. However, his results have been erratic in the wargames discipline since January 2015, although Jason did still win the Gauteng Schools Championships and the Johannesburg Regional Championships. Jason too finished in tie second place at the 2015 MWEB Mpumulanga Provincial Championships.

After what Jason considered to be an unsatisfactory Mpumulanga Championships, Jason relooked at his strategies and army choice.

The effort that Jason put in paid dividends as he captured the title of Junior World Champion, which he has now won for two consecutive years.

Although Jason is convinced that he can win the title again in 2016, Jason now has his eyes set on the senior title....
Posted by Angellah at 11:55
Email ThisBlogThis!Share to TwitterShare to FacebookShare to Pinterest
Labels: Batzofin, Gauteng, IWF, Jason, Lugogo, MSSA, MWEB, Swaziland, Tuks, wargames