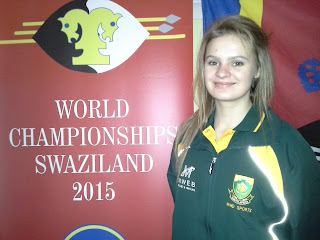 Elishia Retief, has consistently demonstrated her tactical abilities in the tactical game of 'Ancients Wargames' throughout the year.

Thus with Elishia having won every single Female title in South Africa since 2014, as well as the 2014 Female World Championship Title, it is no surprise to see Elishia once again, and rightfully so, take her place in the 2015 MWEB Protea Squad.

At the 2015 World Championships held at the Lugogo Sun, Swaziland, Elishia ripped her opponents apart. As she demolished her opponents, she further entrenched herself as the top female wargames player in the world in order to retain her title.

We all watch and wait, will Elishia be able to win again in 2016?