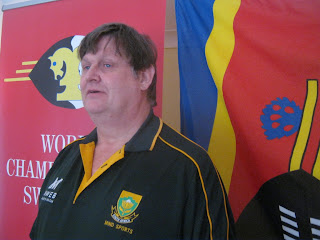 Having won the international Wargames world cup senior title last year, Colin fought for it again at the 2015 Worlds held in Swaziland. After a close game against his former army the Palmyrians and an even closer game against the European Bronze Age, Colin managed to keep his title.

Colin refused to let his hopes slip or let thoughts of defeat enter his head with one bound remaining and still several elements to kill, he managed to successfully crush his enemy in the last bound. Much to the frustration of his opponent this allowed Colin the win the title.

Once again Colin Webster has shown his experience and perseverance. He was gracious in victory and overcame all obstacles to ensure that he won. With the competition breathing down Colin's neck, will Colin be able to keep his title next year in the 2016 International World Cup. Only time will tell...