The event will be the first public contact with Dreamhack Rio, on April 17 at the Marriot Copacabana hotel.

Those who follow the Esports scene are well aware that the Rio Esport Forum, an event that happened last year in April, was the real responsibility for Dreamhack Rio being possible this year. It was at this event that Arturo Castelo, Director of Dreamhack Spain, stated that it was possible to do the festival in Rio. On April 17, two days before DreamHack Rio begins, Brazil Esport Forum will have one more edition, but this time on a national level, with the presence of great authorities at the Marriot hotel in Copacabana.

The agenda includes topics such as:
The event will last from 9am until 6:30 p.m. The closing topic will be: "Dreamhack and the esports ecosystem in Brazil," which will give a taste of the largest sports festival in the world which will be held between April 19 and 21 at the Olympic Park in Barra da Tijuca.

Among those invited to speak are: 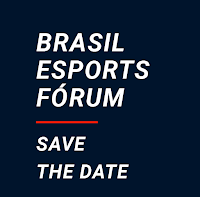 "We need to expand the ecosystem of games, so we will have the participation of public authorities, sports specialists, entrepreneurs, pro players, press professionals and game developers. We also want to bring together professionals from other segments and create a connection with tourism, innovation and education. It will be a unique experience! " Says Director General of Dreamhack Brasil, Filipe Rodrigues.

The Brazil Esport Forum is an excellent opportunity for those who wish to enter the esports market in Brazil. Not to mention that it will be a differential for those who seek to network and want to be alongside great entrepreneurs of the Brazilian game scene.
Posted by Esports South Africa, and other games at 13:09
Email ThisBlogThis!Share to TwitterShare to FacebookShare to Pinterest
Labels: Arturo Castelo, Bitrep, Brasil, Brazil, Busan, Curitiba, DreamHack, eSport, FERJEE, Forum, IeSF, Rio, Spain, Supernova