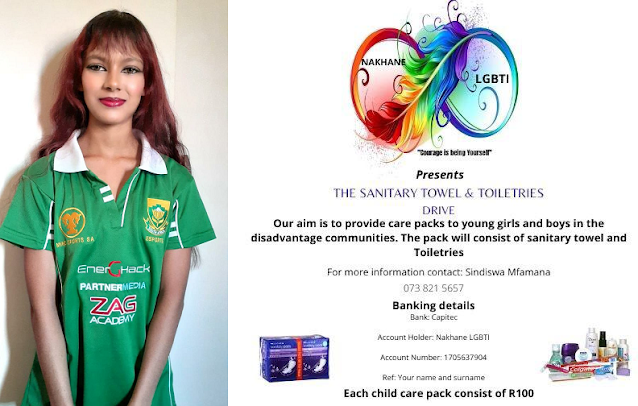 Mind Sports South Africa (MSSA) fully supports the initiative to provide care packs to young girls and boys in the disadvantaged areas.
A study shows that most underprivileged girls miss school for at least four days each month over menstruation.

These issues are not talked about, due to embarrassment, lack of understanding and the low priority of such problems in the face of starvation, violence, death, illiteracy and the many struggles of daily life.
The loss of school days though, has a catastrophic effect on their schooling and, in greater terms, the development off the South African economy.
The appeal is for all kind-hearted people to donate R100.00 or toiletries to this cause.

Charlize Seremak (pictured above) was a member of South Africa's 2019 Protea Esports Team and represented South Africa well in the TEKKEN 7 esports title against the best players in the world, Charlize was an immediate hit at IESF's 2019 World Championships in Seoul, South Korea, where she made an indelible impression on all.

Charlize too, has a strong belief in giving back, and in support of this initiative says, "It is such a great feeling to see that humanity still exists in the world when people and organizations step out to help the underprivileged. It is especially motivational to the younger generation, as it will motivate them to do the same when they become adults. In a society motivated by material greed, it is especially refreshing to see efforts like these, where the selflessness of humans are displayed. Myself, as a public figure, support and commend such efforts. Keep it going and good luck!"

It is hoped that all readers will rally round to support this worthwhile cause that will assist in keeping learners in school.