Report on day 1 of the 2015 IeSF world championship: League of Legends 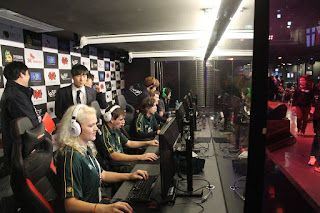 South Africa getting ready for the match against Thailand


Day 1 saw team South Africa take on Switzerland, Thailand and Iran in a best of 1 format for League of Legends. Game 1 against Switzerland was highly competitive as the  MWEB Protea eSports Team South Africa got off to a flying start with an early gold lead and turret advantage. The game saw first blood go to South African mid laner Matthew "Feno" Smith on Lulu when Dennis "koala with a hat" made a risky invade. The game remained close up until the 17 minute mark when Swiss jungler Dennis "koala with a hat" Berg started to snowball bottom and mid lane with some mechanically skilled Lee Sin plays. The Swiss team capitalized off of the mid game and saw them win at 28 minutes.
In the second game South Africa took on Thailand on the main stage which was broadcast live to thousands of viewers around the world. Cameron "SexyB" Tilley said the game was especially exciting as they got to play in one of the famous "gaming booths" commonly used here in Korea. Everyone who watched the game live here in the arena and those watching on line commented that this particular match was the closest and most competitive game they had seen up til then. First blood went to Taylor "Elis" Rose at 4 minutes with a level 3 gank on Lee Sin when Charoen "Argonaut" Limprasert overextended on Lulu against Vasudev "TagaBearClaw" Stringer on Pantheon in the top lane. The South African team drafted a strong early and mid game composition with a Lee Sin Jungle pick and Pantheon top lane pick, the down side to this composition however is that it had a time limit to close out the game before the late game started. The casters mentioned that the game was particularly fun to watch due to the aggressive and unusual current meta top lane Pantheon pick with Ignite/Flash as summoner spells. 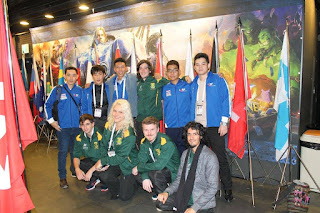 
The undoubted star performance of the second game came from the South African mid laner Matthew "Feno" Smith on Ahri. Feno applied a lot of pressure in the mid lane which spilled over in to the side lanes as the jungler from Thailand had to constantly visit the mid lane to try and relieve some of the lane pressure after the level 6 mark. He also flourished in the mid game with some spectacular Ahri mechanics and flash-charm plays in the jungle skirmishes. At the 30 minute mark Feno had accomplished a 4.0 KDA with a score of 9/5/11. He had also completed his Zhonyas Hourglass, Luden's Echo and Morellonomicon with the eye on mitigating some of the life steal the Thai AD carry Panthakan "Murphyy" Kukham was building up on Vayne. The Thai team was running a protect the AD carry composition with Lullu in the top lane buffing up Vayne who was starting to snowball off some mid game kills. This proved effective as a late game team fight around the Baron pit swung the game in the favor of Thailand. The Thai team managed to capitalise off of this late game fight and saw them drive home a win in a nail biting finish.
South Africa faced off against Iran in the final game of the day. The South African bottom lane shined in this match with Cameron "SexyB" Tilley on Vayne and Maryke "Ykie" Kennard on Janna. The bottom lane synergy of South Africa proved to be too much for Iranian bottom lane of Iman "iman" Delaram on AD carry and Mohammad "mohammad" Nejati on support as Cameron and Maryke expertly navigated the early and mid game to create a massive gold and objective lead for South Africa. South Africa ran with this lead with an overwhelming victory at 37 minutes.
The team is looking forward to day 2 of the 2015 IeSF championship with some test matches against Australia and Serbia