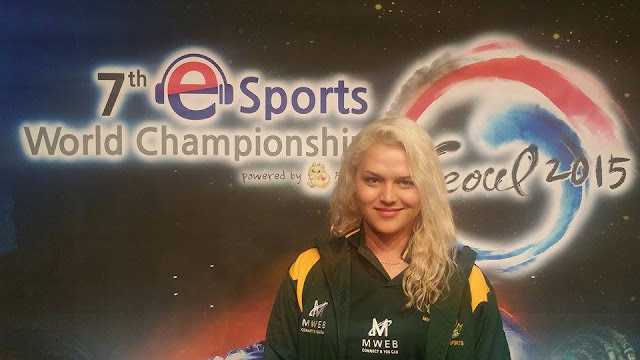 Maryke proved to be flexible enough to adapt to the changing circumstances and grabbed each and every opportunity as they presented themselves to her.

Before the championships even began, the Secretary general of the IeSF (Mr. Alex Lim), requested

At the opening ceremony, Maryke performed the oath with poise and dignity to become the first female to take the oath on behalf of all participants.

Although Maryke more than ably lead the South African League of Legends team to a stunning victory over Iran, it was, sadly, not enough to climb out of the group stage.

It should too be noted that Maryke is the first female to captain a League of Legends team at such event.

However, with a shout-caster falling ill, Maryke was then drafted in to shout-cast as her own experience in this regard had not gone unnoticed by certain IeSF officials.

Thus Maryke was shoved into the forefront of a different aspect of eSports to become the first female to ever shout-cast at an IeSF World Championship.

Teamed up with Reid 'RAPiD' Melton, Maryke 'Ykie' Kennard took to shout-casting like a duck to water. Reid proved to be a great mentor and associate as he brought out the best in Maryke.

There is no doubt that Maryke has left an indelible impression on eSports which is likely to be remembered for many years to come.