Report on day 1 of the 2015 IeSF world championship: Starcraft II Legacy of the Void

Day 1 of Starcraft II had 16 nations compete in a 4 group, 4 nations best of 3 round robin tournament structure. South Africa's player Nathan "Static" Anderson was drawn in to a group with Sweden, the Phillipines and Azerbaijan. 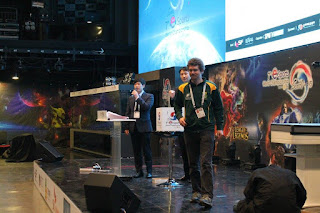 Nathan (MWEB Protea eSports Team South Africa) played against Sweden's "Zanster" in his first match of the tournament who was considered to be the strongest player in their pool based on the 2014 IESF results. Game 1 was very close as Zanster underestimated Nathan's Protoss composition. Recent changes to Skytoss making them more viable and allowing Nathan to win early engages. The game went back and forth for the first 20 minutes untli Zanster starting expanding his base rapidly and attacking Nathan's resources. Zanster kept harassing Nathan's base by using overlords to drop zerglings in to his base. Nathan eventually ran out of resources and could not support his army anymore and consequently lead to a defeat for Nathan in the first game. After the first game Zanster realised how good a player Nathan was and and turned up the heat for the second game in a convincing victory. 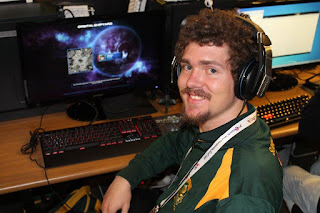 Nathan getting ready for his first game﻿

In the second match Nathan played against the Phillipine player "Enderr". Nathan played a ground unit Protoss composition for the first game which allowed him to get good harass off in early skirmishes with disruptor shots. Enderr ran a strong Zerg composition however and had the more powerful army with a large number of Mutalisks which forced Nathan to constantly react to attacks on his base and resources. Enderr eventually overwhelmed Nathan's base and destroyed his structures with a final winning push. The second game was much closer as Nathan had a better feel for his opponent's strategy. The game was going well for Nathan as he got good early harass off on Enderr's base and workers. He also placed good stasis traps which allowed him to to effectively deal with Enderr's mid game army. Enderr made a very risky all-in play which paid off by catching Nathan off gaurd: He created a Nydus Canal which allowed him to teleport his army and attack from within Nathan's base. Nathan tried to destroy the Nydus Canal in vain as Enderr could heal up the Canal with Queen transfusions. 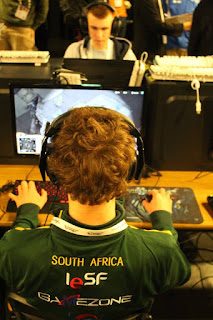 The final game of the day had Nathan face off with Azerbaijan's "Pavel". Nathan won the first game convincingly with a Skytoss composition which is his most comfortable build. His carriers constantly harassed Pavel's base which made him run out of resources and consequently lead to a victory for Nathan. In the second game Nathan decided to run a Groundtoss composition making effective use of disruptors and blink stalkers. This micro intensive composition proved too much for Pavel and lead to a 2-0 victory for Nathan.