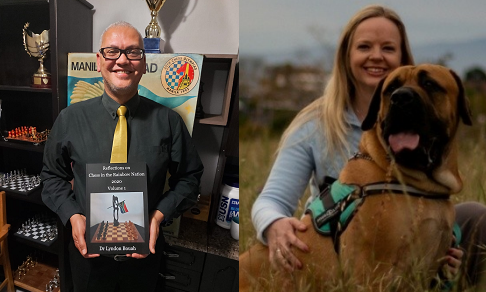 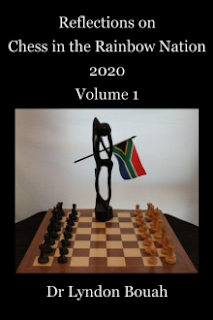 Reflections on Chess in the Rainbow Nation

The ideal book to test and improve your chess this summer!

Dr Lyndon Bouah is a Candidate Master and former South African Olympiad player. He is a coach and plays competitively for Steinitz Chess Club. He has been captain of WP and South Africa at various national and international events respectively. This is his first volume of a series of reflections that he is publishing.

It tells the stories of chess in Cape Town, South Africa, Africa and the world stage. Join him on this journey as he seeks to record for posterity the fascinating story of our chess tournaments, our chess players and our chess history in general. In the book he covers recent events ranging from the SA Closed 2019 to the SA Club Championship 2019.

There are over 150 complete games, 250 diagrams and 166 individual players that are highlighted in this book. He has also added some stories about Vladimir Lenin, Paul Morphy and Levon Aronian. There are about 36 crosstables and results for the statisticians!

BOOK INFO: A4 Size, 228 pages with games and diagrams 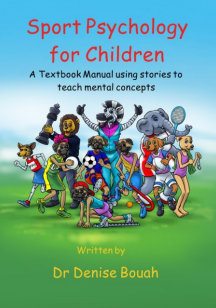 This book should be part of every young athlete's sport preparation! It is also a useful guide for parents and coaches who at times must play sport psychologist!

Lessons learned in this book are not restricted to just sport, they can be used in other areas of a child's life too. Children get to journey with Jad, Xena, Chika, Bob and other characters through their sport adventures and experiences as they come to learn that there is more to sport performance than just the physical component.

This book is the brainchild of Dr Denise Bouah who is a respected national athlete and coach in South Africa. She is a Woman International Master (WIM) in chess, 7x Olympiad player and 3x South African Woman Chess Champion. Her 32 year sport career has given her a front row seat in the highs and lows of sport participation, psychology, coaching and administration. Coupled with her academic achievements and career as psychologist, she is in a unique and empowered position to have written this book. It covers the "what we wish we knew as young, aspiring athletes." Just without all the frills and complicated academic jargon.

Sport Psychology for Children is written for children who want to learn more about the mental side of performance. It is also a useful guide for parents and coaches who at times must play sport psychologist! Lessons learned in this book are not restricted to just sport, they can be employed in other areas of a child's life. It is written in everyday language and makes the daunting mental concepts accessible to the young mind. Journey with Jad, Xena, Chika and other characters through their sport adventures and experiences as they come to learn that there is more to sport performance than just the physical component. Join the cast in their adventures as Bob learns about dealing with a loss, Chika overcomes her pre-game anxiety and Xena learns to control her breathing. Not only can children relate to the stories in this book, but they will also learn about the basics of Sport Psychology which include values in sport, dealing with setbacks, goal setting, developing productive habits and so much more.

The stories have been written and structured in such a way that children will find valuable information throughout. Opportunities are given for children to reflect on the principles and concepts discussed in this book. They get to answer important questions relating to the application of the concepts in their own lives. Sport Psychology for Children is not a one-time read. It is a manual designed in such a way that children can benefit from it throughout their sporting careers, no matter the level of participation. It aims at empowering children with the mental skills that can contribute to having a successful and enjoyable journey in sport. Dr Denise Bouah is a counselling psychologist who specialises in Sport Psychology. She holds a BPsych (Child Context), MA Counselling Psychology with specialisation in Sport Psychology, and a DPhil Human Movement Science degree (University of Pretoria). Through the years her studies have focussed on the habits, values and mindfulness of athletes, as well as the use of chess as a therapeutic tool as part of alcohol and drug rehabilitation. She values hard work whilst maintaining a balanced lifestyle, having received the University of Pretoria's Vice-Chancellor's Award for the student with the best combined Sport and Academic Achievements during one of her student years.

Denise also holds the title of Woman International Master in Chess and is a 3x South African Woman Chess Champion. Denise represented South Africa at junior level in 1998 and, since 2000, at senior level. She has been a key member of the South African Chess teams and squads to various World Olympiads, World Teams and World Individual Championships, All African Games and African Individual and Zonal Championships. She combines her rich sport and therapeutic experiences with her academic knowledge to work with athletes on all levels. She has also been an active chess coach since 2000 and works with players of all ages and varying levels of strength. Denise has a love for dogs, and in particular the South African Boerboel on which many of the characters in this book are based. Her vision is to bring sport psychology and mental skills to each and every young athlete in the world. Her 32 year sport career has given her a front row seat in the highs and lows of sport participation, psychology, coaching and administration. Coupled with her academic achievements and career as sport psychologist, she is in a unique and empowered position to have written this book. It covers the "what we wish we knew as young, aspiring athletes." Just without all the frills and complicated academic jargon.

Dr Lyndon Bouah holds the title of Candidate Master in chess. He qualified for this title at the 1992 World Chess Olympiad. He also competed for South Africa at various international events including the 1993 African Junior Championship in Nairobi where he was the joint runner-up, the 1994 Olympiad in Russia and thereafter the African Team Championships in Nigeria and various African Individual Championships in Zambia in 2005, Uganda in 2016 and Zambia in 2017. Dr Bouah has been the captain of the South African Chess Team at the 2002, 2004, 2014, 2016 and 2018 Chess Olympiads held in Slovenia, Spain, Norway, Azerbaijan and Georgia. He was also captain of the team that won the Zone 4.3 Team Championships in Mozambique in 2008 and was captain of the South African Open Team at the All African Games in Nigeria in 2003. He led Western Province to ten Interprovincial Team Championships and has been the Steinitz Chess Club captain that has seen them win 9 national club titles, 8 provincial club titles and 11 district club titles. In his own right, Dr Bouah has won multiple Western Province Open and Closed Championships as well as the Eastern Province Closed Championship and University championships. Dr Bouah has served chess as an administrator, coach, player and journalist for the last 33 years. He is an Advocate of the High Court of South Africa and completed his law degrees at UWC and UCT and PhD at UWC in 2016. Dr Bouah is currently the Chief Director of Sport and Recreation in the Department of Cultural Affairs and Sport in the Western Cape Provincial Government.

Cost: R600 per combo Add R100 for courier cost if you are not living in Cape Town.

Posted by Esports South Africa, and other games at 11:39