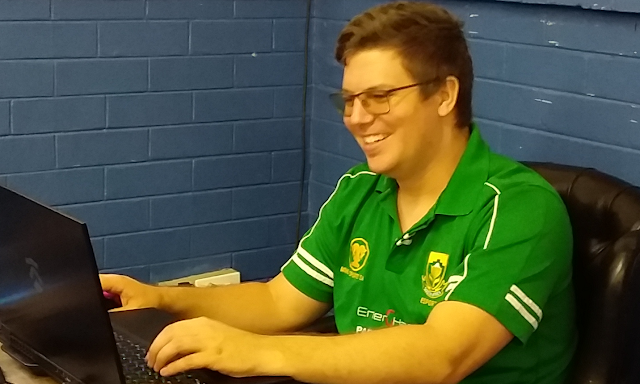 Johan van Breda carrying out his tasks with his normal cheerfulness.
It is never easy to select the recipients for Mind Sports South Africa's Management Board Awards as there are always so many worthy nominations.
Nominations poured in from practically every member club. One such notable nomination was for Suzan Ledwaba “Suetheplayer” who narrowly lost out to Barry Bridges in the Social Media Person of the Year category.

Mind Sport South Africa (MSSA) initiated its Management Board Awards back in 2009 to recognize the contribution made by those who gave selflessly, and/or made an impact, to the promotion of the various types of gaming under the jurisdiction of MSSA.
The list is a veritable 'who's-who' in South African gaming.

All recipients have shown themselves to be of the highest standard and are a credit to South Africa. MSSA is proud that each and every one of the recipients is part of the official community which strives to make a real difference in the lives of all participants. MSSA sees gaming as more than participation, more than a business.
Gaming is a way of life, it is a way that participants may reach their full personal potential, it is a way that the individual can achieve all that they can.
Mind Sports South Africa (MSSA) shall thus always fondly remember the winners and the incredible contribution that they made towards gaming.
The Management Board has agreed to award the following: