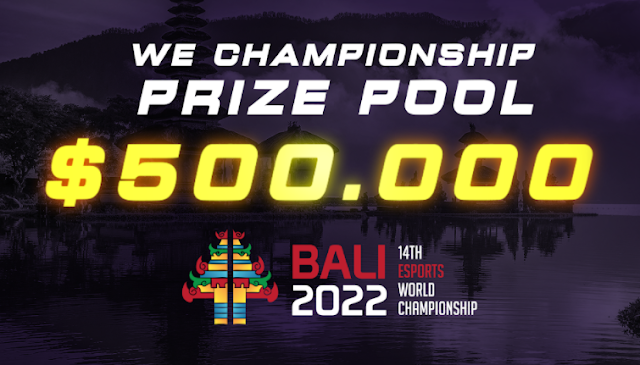 Busan, South Korea (23 February 2022) – International Esports Federation (IESF) has announced a total prize pool of $500,000 to be awarded at the upcoming 14th WE Championships Finals, taking place in Bali, Indonesia from 27 November to 9 December. The WE Championships prize pool has seen an unprecedented increase in just one year, from $55,000 in 2021 to $500,000 this year.

IESF President Vlad Marinescu said: “We are very excited for this momentous growth of the 2022 WE Championships Finals prize pool to $500,000, which is representative of the growing popularity and credibility of our flagship event. We are on track to hold the biggest and most inclusive WE Championships yet. We look forward to further increasing access to professional Esports opportunities and providing athletes with the ultimate environment to perform at their full potential.”   Mind Sports South Africa's (MSSA) President, Colin Webster (also Past President of IESF) stated, "This is a welcome development which is the fruit of many years of hard work by successive IESF Boards. The increase in prize money will further enable the growth of esports as a mainstream sport and is greatly welcomed by MSSA."

IESF recently announced the six game titles which will be featured at the competition. CS:GO, Dota 2, Tekken 7 and eFootball will return to this year’s WE Championships and mobile games PUBG mobile, Mobile Legends: Bang Bang will be featured for the first time. Registration for National Federations opened on 20 February and over 120 countries across six continents are expected to compete in the regional and national qualifiers.

The WE Championships remains the sole international Esports event where athletes compete by representing their countries. Bali was awarded hosting rights in September 2021 and was handed over the hosting duties during a special ceremony following the 2021 WE Championships Finals in Eilat, Israel, which united the World Esports Family for the first time since the COVID-19 pandemic.