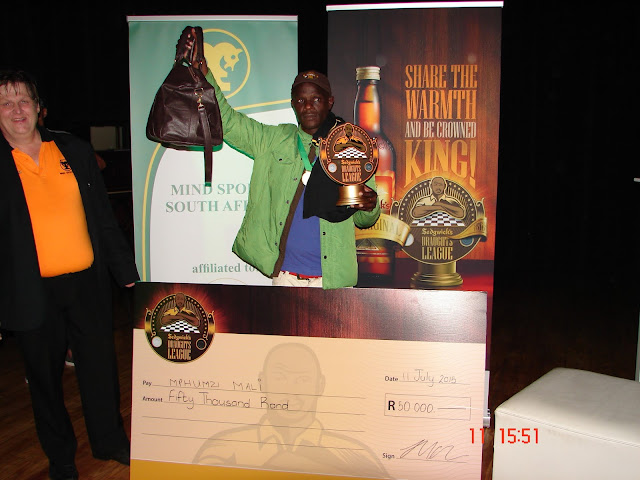 On 11 July 2015 in the Centenary Hall in New Brighton, Port Elizabeth, the top 126 players from the gruelling seven week Sedgwick's Old Brown Sherry Draughts League assembled to find out just who is the best player in the Eastern Cape.

The air was electric!

There was much to play for.

This is the richest draughts championship in South Africa with total prize monies of R175,000.00.

The determined contestants battled it out with a great degree of sportsmanship. Lubabalo Kondlo, the reigning South African champion, was there as well to assist with the refereeing.

As the rounds progressed, it became clear just who the front-runners were.

When the dust settled, the top four were:

In addition to his winnings, Mphumzi has also earned his Provincial Colours from Mind Sports South Africa (MSSA).

It will indeed be interesting to see who the winner is in the 2016 edition.
Posted by Angellah at 18:10