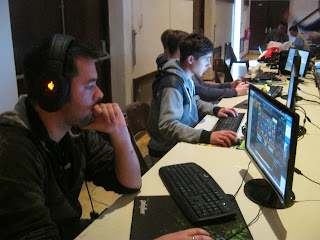 The MWEB 20th Western Cape Championships shall be played on 22 & 23 August 2015 and shall be hosted by Fairmont High School, Durbanville. As usual, the championships also count as part of the process for qualifying for the MSSA's National Team Trials for all disciplines.

Players who wish to compete in any of MSSA's Championships are advised to complete their annual registration forms so that they may registered as Registered Players Players as soon as possible.

Late entries shall be accepted in exceptional circumstances.

All gamers are reminded that the Western Cape Championships are an open championship. In other words, any Registered Player is entitled to enter the championship - no matter where they live, or their category of membership.

If you have any queries, please contact the MSSA.

Rules and Regulations: All Rules and Regulations pertaining to eSports are available from the MSSA. Players are strongly advised to familiarise themselves with the LAN League Bylaws and all Period Specific Rules. If any Player wishes to provide advice regarding the drafting of the Period Specific Rules they are encouraged to contact the eSBoC who will take all comments into account.
The following Medals may be awarded at the MSSA's 2015 Western Cape LAN Championship:
Colours and National Team Trials:
Please note that the MSSA does not carry stock of shirts that are awarded. Registered Players who are awarded colours will thus be awarded at an event that they attend after being so awarded.

Please note that times may be changed to take into account load-shedding.
Posted by Angellah at 23:22