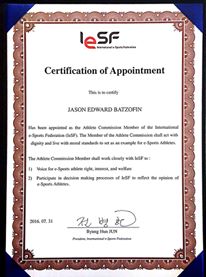 Mind Sports South Africa (MSSA) revealed at its Annual General Meeting the recipients of its prestigious Management Board Awards for the 2016 year.

Such awards have been awarded since 2009 and properly reflect those who have dedicated there time and efforts.

It is always difficult for the Board to make these awards with so many outstanding performances from which to choose. There are just so many members who have delivered outstanding results during the year. Thus, the entire membership is enrolled in making nominations, and it is from these nominations that the final choice is made.

Jason Batzofin – Jason is a two times Junior World Champion for Ancients Wargames. His dedication is unparalleled. Jason too, is committed to development and promotion of the game. Not only that, but Jason, in 2016, was hand-picked by IeSF to serve on the IeSF Athlete's Commission and served as the youngest Team Manager for a  Protea eSports Team.

Matthew Smith - Has represented South Africa in both 2015 and 2016 IeSF World Championships in the game of League of Legends. His drive, dedication and ability to motivate other team members  makes him a worthy recipient of this  award.
Garth Schoeman – Garth has been a loyal member of MSSA since the 1990's. Although  work and family life have impacted on his gaming, over  the years Garth has still managed to serve on MSSA's MANCOM, run Knights Mind Sports Club and be a fierce competitor. Thus, although he first earned Protea Colours in 2002, Garth's standard is still good enough for him to win the 2015 SA National  Championships and be re-awarded National Federation Colours.

Colin Webster – Having  been involved in MSSA since its  inception, Colin has remained active and dedicated to MSSA.

MyComLink - The website has given MSSA fantastic coverage. MyComLink is one of the fastest growing community portals in South Africa.

In 2016 they launched E-Magazines for different interest groups and in 2017 they will be launching a Gaming Magazine supported by Blue Label Telecoms.

Follow the Mind Sports South Africa page on MyComLink to keep up with the latest e-Sports news and results.Without the site, MSSA's reach would not have been as significant as what it is.

SterKinekor – SterKinekor has shown consistent support over the years. SterKinekor's commitment to eSports has been unwavering and is much appreciated.

The winners since 2009 may be viewed on:  https://en.wikipedia.org/wiki/Mind_Sports_South_Africa#Management_Board_Awards

Posted by Esports South Africa, and other games at 12:17