Are SASCOC's plans for NF's inspirational, or just a fail?

There is no doubt that it is vitally important for every federation to extend their activities into every nook and cranny of South Africa if South Africa's vast resources of human potential are to be unlocked.

SASCOC has taken an aspirational approach to the problem although they seem to be looking at a 'one shoe fits all' solution.

Of course I do not believe that such an approach can work, but in order to be fair, let us look at what SASCOC is suggesting.

SASCOC maintains that the structure should be in a pyramid in nature which will be best represented as such: 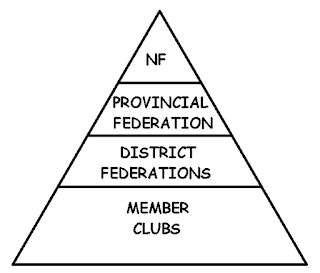 Now it looks great, at first, but it must be remembered that the majority of sport is driven by volunteers.

Thus the system will require the following numbers just to 'man' the committees:

So, the above proposal will require roughly 1,390 office-bearers just to run the system.

Remember most of these people will have to be volunteers!

This of course does not even include technical officials who will be needed to run the competitions.galas/ track-meets, etc.

It is estimated that the average federation would need another 2,500 technical officials, or if they do not have that, there will be a very overworked hard core of parents who will become less-and-less enthusiastic as they lose all of their weekends in providing events for others.

Being an office-bearer or technical official is often a thankless task as decisions are often made which do not sit well with the vocal few. Even the likes of Cathy Doyle (who was much liked by most of the swimmers) of the Central Gauteng Aquatics Association had a small group of vocal detractors.

The increased burden of the system as outlined by SASCOC is likely to have the unexpected outcome of chasing away the committed few which will lead to the total collapse of many sporting codes.

I believe that volunteerism goes hand-in-hand with financial ability. No-one can expect a person who is not financially advantaged to volunteer to run a sporting body. However, it should be noted that many sporting bodies are themselves quite poor and unable to pay anyone to do the required tasks.

The proposed system also dilutes the influence of the athlete.

Instead of the athlete now having direct recourse at National Federation (NF) level, the athlete has to struggle through an increased bureaucracy to get through the club, district, provincial, and national federation officials and red-tape.

The dilution also affects the ability of people to stand for positions on the National Federation. In such a way the Committees that run NF's become very little more than cabals of like-minded people who become almost impossible to dislodge.