At the MWEB sponsored 32nd Gauteng Championships, Erasmus Burger dominated the championships from start to finish.

At such championship, held in March, Erasmus scored a perfect victory earning himself the maximum points that could be earned.

A number of critics started to claim that it was due entirely to the fact that the current SA Champion from St John's College ((Jason Batzofin) was not present.

Erasmus of course laughed off such critics, and to prove a point entered the MWEB sponsored 14th Mpumulanga Championships.

So, on a misty Saturday morning, Erasmus headed out to Witbank to do battle, and do battle he did.

Erasmus showed no mercy and attacked each and every opponent with passion.

None could blunt his attacks, and all succumbed as Erasmus again notched up not only another provincial title, but also a perfect win.

Obviously his seeding points reflect his win as he pushed his points from 668 to over 1,000 points, being the first South African in 2015 to cross such threshold.

Erasmus is now setting himself up as the undisputed champion in Ancients wargaming.

It will be interesting to see if he can maintain his form until the SA National Championships in December.

The rankings of the top twenty South Africans is as follows: 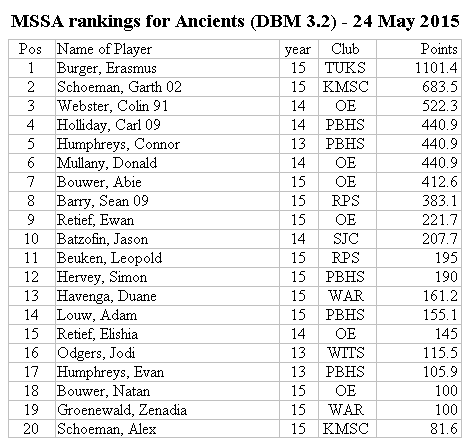