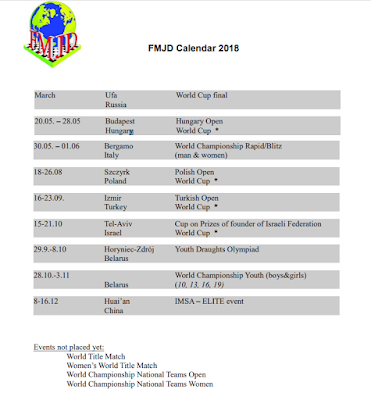 The Fédération Mondiale du Jeu de Dames (FMJD, World Draughts Federation) is the international body uniting national draughts federations. It was founded in 1947 by four Federations: France, the Netherlands, Belgium and Switzerland.
Currently, the FMJD has more than 50 national federation members. Recently the FMJD has become a member of the GAISF and strives for Olympic recognition. The FMJD memberships is part of a more general movement toward integration of Mind Sports in the regular sports arena, a development that, in the vision of the FMJD, is to be lauded.
The FMJD is member of the:
General Association of International Sports Federations (GAISF), and