The way that Mind Sports South Africa (MSSA) now selects its national teams is by first selecting a squad for each title.

Once the squad is selected, athletes within such squad are selected for various terms of duty.

However, it should be noted that the entire squad shall be awarded National Federation Colours, and once the athletes actually are selected for the Protea Team to play against an international opponent, the Protea Colours award shall be made.

The squad consists  of 10 players of whom 5 are male, and five are female.

Ryan van Schalkwyk (Team Captain)
Ryan nan Schalkwyk is only 21 and is a software developer.

Along with CounterStrike, Ryan enjoys playing my guitar and making music.
Ryan quickly admits that he enjoys pushing himself hard and bettering himself. The competitive aspect of CounterStrike: GO enthralls Ryan. It is through such hard work and competitive spirit that has allowed Ryan to earn the achievement of being selected as Team Captain, an achievement of which Ryan admits that he has always dreamed.As Ryan says, " I'm really looking forward to pushing myself and my team as far as we can go at the world championships".

The Vice-Captain is non other than Esmari Swart and has become the first female Vice-Captain of a South African CounterStrike: GO squad.

Esmari currently is studying a degree in BSC in Information Technology and Robotics at NWU Vaal.

Yet even though she is totally committed to her studies, Esmari finds the time to be truly dedicated to esports in that she founded InTenSity eSports, competes on a regular basis, and even umpires at MSSA events.
As Esmari states, "I got into competitive eSports by meeting people in the CS:GO community. Met such amazing and interesting individuals who inspired me and pushed me to try and become the best player I could! I have always enjoyed gaming but never knew the competitive side of it. When i got introduced to it at the end of 2016 I couldn't get enough! Ultimately what drives me is to see the eSports scene in South Africa grow and to go as far as I possibly could go! I enjoy the competition too much to not try my best and get involved in any way possible".

Certainly from what MSSA has seen, Esmari is driven. Esmari has already earned herself Gauteng Provincial and National Federation Colours and has both Provincial and National titles under her belt.
With Ryan van Schalkwyk and Esmari Swart at the helm of SA's  National CounterStrike: GO squad, great things  are expected from the squad as a whole.

Rojuan, from Cape Town,and, although employed as a Sales and Stock Manager, has been an active competitive esports athlete for the past 5 years.
Rojuan tarted playing multiplayer online games back in 2012 when COD 4 was the 'thing'. Having also played Call of Duty Ghost in 2014 for his own clan 'Extreme Rush', Rojuan made the move to CounterStrike: GO and currently plays for VexxedPhoenix.

Rojuan has said, "I am excited to travel to South Korea and represent South Africa. Definitely going to be giving it my best to prepare and perform at all events. I would like to thank MSSA
for this opportunity".

Simon Zandstra, has been playing competitive Counter-Strike: Global Offensive since 2015. Over the 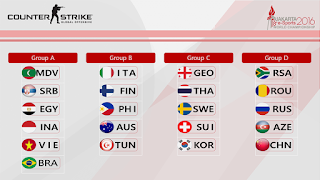 years Simon's passion for the game has only increased with each passing year, and he will profess to all  that he truly loves the esports game of CounterStrike: GO.

Simon represented South Africa in South Africa's National Protea Team at IeSF's 8th World Championships - Jakarta where the team battled it out in what many considered to be the 'group of death' consisting of Azerbijan, China, Romania, Russia, and South Africa. Thus Simon brings  to the team his experience of the international stage.
As Simon says, "Playing at the very highest level of CS:GO will always be a dream of mine, and I am determined to grind my way to the top. I love my country, South Africa, and my city, Cape Town, and I hope to represent them to the best of my abilities, and prove that I have what it takes to be the best".

Leander has confessed that he has always been fascinated by games - for  as long as  he can remember. While watching his uncle Johan 'cyb3rj' Kleynhans play fps games, Rojuan developed a deep attachment for esports. For hour-upon-hour Leander would watch his uncle compete in Battlefield. It was though Johan 'cyb3rj' Kleynhans' help that Leander obtained his first personal computer (pc) and has ever since helped Leander continue improve his equipment.
While playing, even though Leander is competitive, he always tries to have fun., but, whilke having fun his competitive nature shows and will always push himself to improve and win.

Leander is known to be  sociable and has create strong friendships with  family and friends - a lot who were met online.

As Leander states, "Now my thrust is greater than ever seeing my team doing well in different stages and different tournaments. And still believe I have a lot to learn".

It would indeed be strange if  a Mind Sports National Squad did not have a student from University of Pretoria (Tukkies). Although James is in his second year of studying BEng Computer engineering at the University of Pretoria (2nd year), James is a committed esports athlete.
Having started playing multiplayer online games back in 2007 when COD 4 came out, James moved on to COD:Black Ops 3 and finally on to CounterStrike: GO. James too currently pays for VexxedPhoenix.
James states, "I am excited to travel to South Korea and represent South Africa. Definitely going to be giving it my best while trying to balance studying and gaming. I would like to thank MSSA for this opportunity".Bernicé Botha

or MissT, is a self-confessed CounterStrike: GO addict. Havng started playing CounterStrike: GO four years back,  Bernicé has aalmost become evangelical in recommending the game to  new players.
Bernicé freely admits that she has made a lot of new friends through the game of CounterStrike: GO, of which some became her family.
It is through Bernicé's lovet of the game that she finds enjoyment in both victory and in defeat. Bernicé is the first to admit that it is sometimes  important to lose as players, if open to the experience, realise that through defeat esports athletes may learn new skills.
As Bernice says, "there is always gonna be someone better out there than you , so just keep on practicing and playing and you will improve".
Jessi-Rae Warren
Jessi-Rae was introduced to CounterStrike: GO by her boyfriend as she would often watch him play and she thought that it looked like a lot of fun. Jessi-Rae's boyfriend thhus set up her younger brother's computer for her and really introduced her to the game.
Before Jessi-Rae started playing CounterStrike: GO on her  own computer she hadn't really done much online gaming, having only played a few console games but never anything too serious.
"I really like first person shooter games and I love the competitive aspect of cs as well as the logic needed to play the game. Counterstrike: GO is just as much a mental game as it is a skill based game," says Jessi-Rae.
"Through gaming I have met some amazing people and have been offered some amazing opportunities and I would never be able to go back now".

Blair Hamberger
Blair Hamberger is currently studying at Stellenbosch University. having got into gaming from a very young age on console because of her brothers (I used to play various playstation games with them), it was only three years ago that she began to take gaming seriously and got her first regional colours with MSSA in FIFA.
It was then that Blair decided to start playing Counterstrike: GO and with the aid of Jason Batzofin Blair helped start a female competitive squad and team. Since then the team has been growing together as a team and individually to the best of their abilities in order to reach their true potential.

Blair says, "I enjoy counterstrike because of the competitive nature of the game and its widespread knowledge. It is a very hard game to grasp at first and I always enjoy a challenge and I of course enjoy the game mostly because of my team".

Marisa has been around the scene for a while playing for various teams and organisations.

Her main interest is CS:GO however she also does enjoy playing 'HOTS', 'The Witcher' and 'DOTA 2'.

Marisa maintains, "I consider myself a dynamic and consistent player that works best under pressure and am always looking for a challenge. I cant wait to play against the best in the world and show what SA girls can do".
Posted by Esports South Africa, and other games at 08:11
Email ThisBlogThis!Share to TwitterShare to FacebookShare to Pinterest
Labels: 8th eSports world championships, Black Ops, COD, Counterstrike: GO, CS: GO, IeSF, Jakarta, Mind Sports South Africa, MSSA, National, NWU Vaal, squad, University of Pretoria