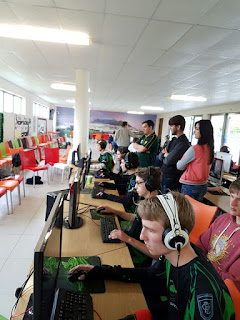 Ever since the entry of Parklands College in 2015, where the College had a triumphant victory in their first year of membership, the College has always been a dominant force in DotA 2 at school level. Having won the
Annual School Provincial On-line Championships in 2015, the College finished in second place in 2016, and then won the title again in 2017.

Under the leadership of Cavan Lang, Parklands College is certainly creating a name for itself  as the school to beat.

Looking at the past results, it very much  seems as though  Parklands College is  the most consistent of all the schools. Such consistency is directly attributable to the College having depth of players.

However, in 2017, there was a strong challenge from both SAHETI and Westville Boys High School, and it will be interesting to see if both of those schools  will also be able to maintain, or better their positions.

At the end of the day, whichever team wins, the Annual School Provincial On-line Championships is bound to be lots of fun and provide many of the learners with much needed experience in competition play.

The past five years' results are: