Mind Sports South Africa's (MSSA) Student Team Esports South Africa has a daunting task at the Open Esports University Games to be played in the Yota Arena, Moscow Russia from 15 to 17 September 2022.

The Serbian team boasts of athletes that represent   the leading universities in Serbia and includes students from IT to Medicine. The Serbian athletes are both experienced and accomplished and are without doubt the cream of Serbian esports athletes.

MSSA's Student Team Esports South Africa may lack the international experience as found in its opponents, but the team's enthusiasm, will to succeed and wish to represent South africa to the best of their abilities means that Serbia has a fight on their hands.

On September 17, we are going to the Grand Final of the competition in Yota Arena. In addition to tense matches and the long-awaited results of the tournament, the audience will have a bright opening ceremony, contests, gaming zones and a rich entertainment program. Admission is free, but pre-registration is required. Take your place in the hall: https://bit.ly/3KIeK2J

The Serbian team is: 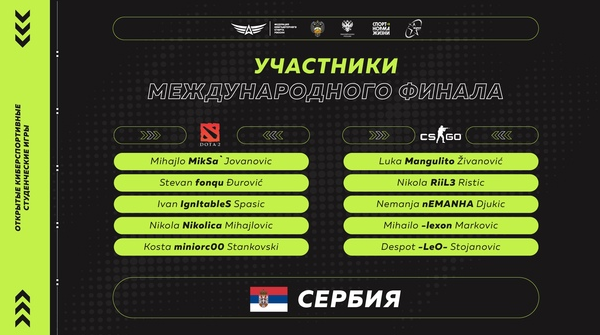 Posted by Esports South Africa, and other games at 15:57
Email ThisBlogThis!Share to TwitterShare to FacebookShare to Pinterest